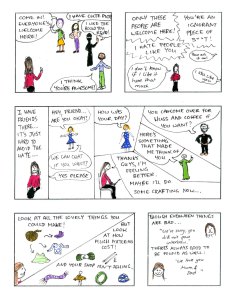 In the context of browser history comics, I was at the British Library last week for a comics workshop run by Ariel Kahn, Senior Lecturer in creative writing at Roehampton University, and Sarah Lightman, an artist and researcher.  We were given the task, in pairs, of describing the characters we were working on and contriving a setting in which they would meet. I was paired with Florian Kammueller, a professor of computer science at Middlesex University, who had been working on a female vampire type character. For me, this exercise prompted the question; who is the central character in a comic of an individual’s browser history?

Character is considered essential to narrative texts and Henry James considered character development to be the driving reason for narrative action. In some corners of narratology, comics is not considered a narrative form at all since it is non-linguistic. It is regarded as occupying a separate category of its own. This questioning of comics as a form would also by extension call into the question the description of an autobiographical comic as featuring characters.

The straightforward answer to the question above would appear to be; the individual who is accounting for a browsing session (or for general internet use) by creating a sequential visual story. Browser history comics, as they are shown in this project, are a bit strange since some of them do not directly depict the author in the way that an autobiographical account usually would.

In formal narratology there is a further distinction drawn between characters, agents and actants. Characters are anthropomorphic actors i.e. they are influencers of action in human form. Agents are things that influence the course of events – a storm could be an agent. An actant performs a deeper structural function in a narrative than a character and can be more than one person (and also non-human) i.e. a pair of thieves or a dragon and a dragon-slaying sword. Actants are essential to narrative events and therefore useful for the analysis of stories. Characters are also usually seen as conforming to various types – the military hero, the shrewish wife, the cunning advisor. In the case of autobiography this is seen in how people frame the story of their lives, perhaps subconsciously identifying with a character type such as, the deserving striver, the caring daughter etc. The main character of an autobiographical story is the narrator, who may be quite distinct from the protagonist. Autobiographical authors are seen as projecting themselves into the narrative and autobiographical accounts are performative – they do something quite apart from any actions they may feature.

Mieke Bal raises the theoretical possibility of actors (her tern for agents) being non-human. In the case of browser history comics we can then make a useful distinction between character, meaning the author (or protagonist where they overlap) and actor. She says an actor is a structural position, influencing the action, and a character is a complex semantic unit eliciting emotional response and other affective phenomena. An actor in this context can then be the browser application itself, the code running the software, the internet connection or even the processor and interface through which the action is accessed. In reality these are represented in different ways in the data. Some comics show a URL progress bar for example while others show avatars, websites and mobile interfaces.

So an analysis of the distinction between character, agent, and actant in browser history comics may be a useful way of thinking about what the data shows. I will be travelling to Liverpool again soon to conduct some interviews with participants and thinking about how to identify these elements of the stories.