I’ll be presenting at the PhD by Design conference this week at Goldsmiths. I’m in a strand called ‘How to Connect with Actors Beyond Academia’. Goldsmiths is the traditional home of critical theory and cultural studies in the UK and has a world reputation in arts based research culture. They have an Interaction Research Studio led by Bill Gaver (formerly RCA), a well respected figure in HCI and design-based research. He’s also well known as the co-author of an influential paper from 1999 describing the cultural probes research method, itself somewhat controversial in HCI.

The CX program I’m part of is in fact a good place to think about the actors beyond academia that a PhD candidate might find themselves in contact with during the course of doing design research as it’s all about building partnerships and knowledge exchange. Non-academic actors fall into a number of distinct groups for me and I have been drawing on all of these at different times. Each group involves connecting in different ways but I would see them as adjacent to academia rather than beyond.

Participant actors The first and most important group for me is participants. Participants are the people involved in the research who I invite, recruit, persuade, or otherwise attract to the research situations. Traditionally, participants are recruited using a few recognised strategies, such as snow-balling when a small chain of people produces a larger group, or more formal methods when a research agency will advertise for people in a certain demographic, such as elderly drivers. Because of the way I have conducted my research so far i.e. in public and semi-public places the cross section of participants has been broad. At FACT in Liverpool, a free public arts centre, it turned out lots of people go there for a cup of tea, to watch a film, and to take their kids out for the day so I ended up with some large family groups, often with disabled children. Working in a pop-up shop in Elephant and Castle brought in a very different group of people. Some had heard about the event from project publicity and had some inkling of what to expect but many were simply passing by and stepped into an unfamiliar situation. I have been thinking about these as serendipitous encounters and there have been some unusual situations with people under the influence of alcohol or drugs and others semi-literate or illiterate. These kinds of challenges are not usually expected when conducting practice-based research but provide important moments of engagement. On reflection, I have deliberately constructed public situations where these encounters would be more likely to happen, i.e. on the street in urban Hamburg

Industry actors The second important non-academic group for me has been what CX calls industry partners. Industry partners are anyone in an organisation which is not academic. The aim here is to foster collaboration, allow for new business ideas to emerge and find a place for PhD candidates in the creative and knowledge economies. There have been a few very structured occasions, at FACT and the RCA, when researchers and industry partners have been brought together with the explicit aim of designing research projects and submitting funding applications for them. The so-called sandpit model is an academic version of these day-long events. For my research I have worked with a furniture design company, a workplace consultancy, a social enterprise, an international NGO, and a national newspaper. All these partners bring very different motivations and priorities to the work and as a PhD candidate I have often been tasked with integrating diverse aims, and managing communications between dispersed partners. The benefits have been enormous however in terms of being involved in new conversations and a wider network, and learning about other disciplines. As industry partner relationships have developed I been able to negotiate access to otherwise hidden structures and expertise but remain somewhat sceptical about over-formalised ways of forging collaborative partnerships.

Incidental actors Alongside these industry partnerships and public-facing research settings I have encountered a whole range of incidental non-academic collaborators. These include; the team running a business incubator centre, cultural activists in Hamburg, top level executives in Cisco systems, organisational teams at FACT and the Royal Institute, designers at The Guardian, community activists in London and artists in Brussels. These are co-incidental actors because they exist alongside more formal arrangements and partnerships and are involved in running activities, organising events, arranging spaces for research, producing materials, or facilitating workshops. They are not recognised as industry collaborators or as research participants but are certainly non-academic actors involved in conducting research.

Informal actors I suspect everyone consults a wide-ranging informal network of friends, family and acquaintances. In the process of refining and developing ideas I’ll be happy to talk to anyone and find out what they think of my ideas. Friends from a wide range of backgrounds and perspectives have informed my thinking. I have been especially interested in speaking to friends of my parents’ generation in their 70s and friends of my children, in their early teens. Family members have opened doors to people unfamiliar with my particular area of practice. With my dad as a PhD supervisor and my sister as a PhD candidate in psychology you can imagine the kinds of things we talk about! Practitioners from my 20 year career as a designer and photographer have also been very important and I find I have a wide and diverse network of people to call on all over Europe to provide advice, feedback, and expertise. When making prototypes for research instruments or developing initial practical artefacts, technical services have been invaluable. They often bring decades of experience in specialist areas and critical intervention on how to do things efficiently and productively. I have been drawing on technical advice from extremely diverse disciplines such as jewellery, place making, drawing, and data analysis, often bringing these practices into productive gestalt.

Zeitgeist actors As we do our research, in my case in public settings, and read around our respective areas’ theories and practices, we do so through public channels. We read blogs and magazines, we watch online videos and feature films, we attend lectures and invite people to lunch. These are all part of the cultural milieu we occupy, the pond we swim in. We are expected to be fully informed about new developments, interesting projects, and relevant practical work. People we encounter on this journey might well be librarians, journalists, artists, cultural adventurers of every sort and random public encounters. The person we sit next to at a talk, the kids on the tube playing a newly released game, the YouTube viral video meme. I don’t think they should be discounted, they’re not associated with our research like incidental actors are, they’re not people known to us like informal actors, and they’re not participants or industry partners. They are projects, people and organisations we encounter in our permanent trawl through contemporary culture. Some are non-human actors (as Latour would say) but most are agents of dynamism in our research areas. 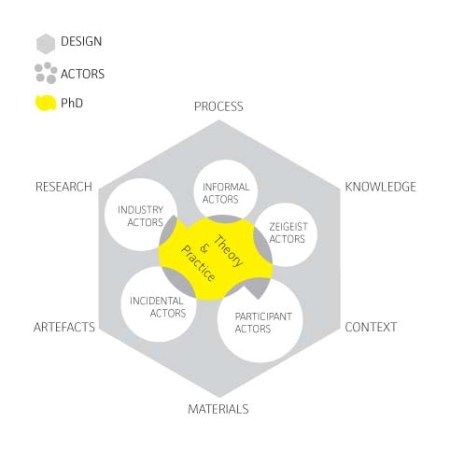